Hurricane season not over yet

Hurricane season not over yet

In 2020 so far, there have been twenty-four named storms. The NOAA classified eight of these named storms hurricanes. The last time we had to use the Greek alphabet for named storms was 2005. In 2020 we had used all the pre-determined names for storms by the end of August! Subtropical Storm Alpha formed 18 September 2020.

NOAA’s National Hurricane Center does report on these storms, but they do not control the naming of tropical cyclones. There is a strict procedure established by the  World Meteorological Organization (WMO), using a list of male and female names used on a six-year rotation.

Worst months for Hurricanes in Florida

For major hurricanes, September and October are the worst months for Florida historically. So while we are almost at the end of Hurricane season, Floridians must remain vigilant and make sure they stay prepared if you live in a Wind-borne debris region of Florida. These regions are where you will find the worst parts of Florida for hurricanes and storms. 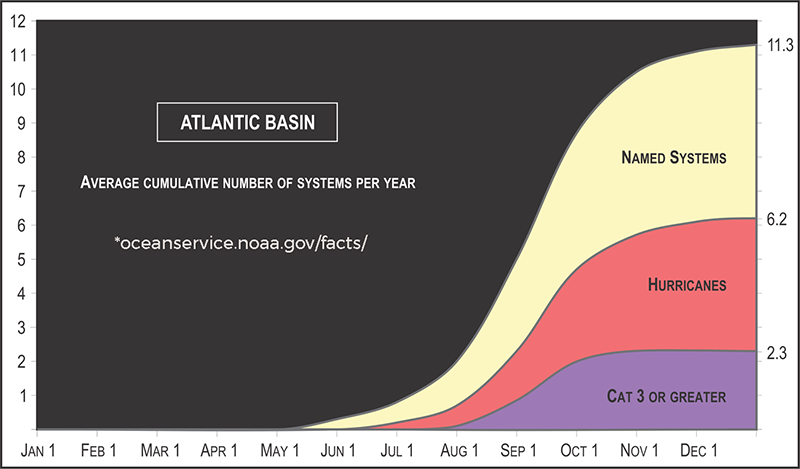 If your property is located in the designated Wind-borne debris region, Florida building code demands that you install hurricane protection on all new or replacement windows.

What does this mean for Floridians?

Florida has been very lucky so far this year in terms of avoiding named storms, but we must be ready. October is a critical time for Hurricanes in Florida, so watch the weather, and make sure that you and your family are ready should the worst happen.

Impact windows and doors protect your home from storms and hurricanes.

Impact-resistant windows and impact resistant doors are a solid way of having peace of mind from storms and hurricanes in Florida.

There are also many other great reasons why you should install impact windows such as energy efficiency, increased security, increased equity in your home, and lower insurance.

Get a Free Estimate

THERE HAS NEVER BEEN A BETTER TIME TO INSTALL IMPACT WINDOWS AND DOORS.

Act now to protect your home. Save on energy & insurance.